And Then There Was One

​​​This spoof of the famous stage mystery is all comedy, filled with hilarious sight gags and dialogue.  Ten people are brought together by mysterious invitation to the Reef Mansion on a tiny, isolated island.  Not one of them knows the host, who is nowhere to be found.  Still, he has left an ominous recording that bodes evil for the guests.  Like the chocolate soldiers that inexplicably disappear from the mantel one by one, the guests begin to die one by one.  Luckily, Inspector Miles is among the guests, but even he is stymied as to who the murderer could be.  As the guests begin to reappear in the final scene, we discover the farcical twist!  A great spoof, this delightful script that’s a cinch to costume and stage doesn’t miss any opportunity for lively comedy and humor.

This is a non-musical, full length play with full-scale sets, costumes, props, lights, and sound. The cast and crew size varies each year, and is open to all students. 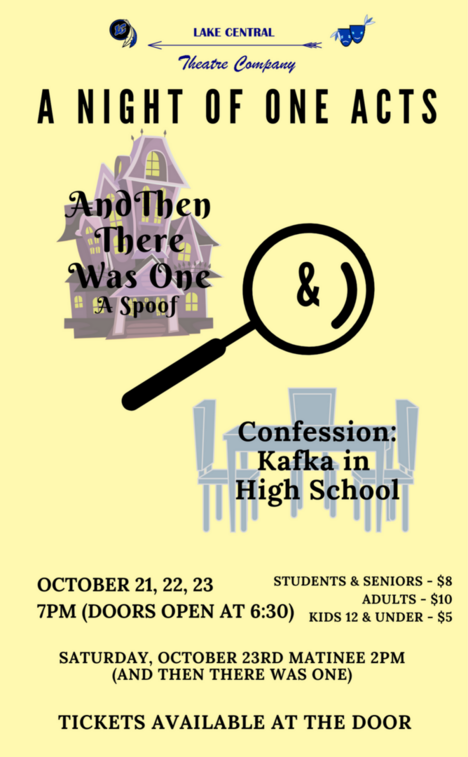 Model student Connor K. wakes up one morning to find himself in his high school's conference room, being interrogated by the principal. How he got there, Connor doesn't know, but the principal is insistent that the only way out of the room is for Connor to confess to a crime that he couldn't have committed -- in fact, he doesn't even know what he is being accused of! Only ever meaning to be a good student, he learns that sometimes you have to speak up for yourself against injustice. This chilling adaptation of The Trial brings the absurdism and existentialism of Kafka to high school with keen insight and dark humor.

A Night of One Acts

October 22 2pm Matinee for And Then There Was One

This is a major musical production with full-scale sets, costumes, props, lights and sound. Cast and crew size varies each year, and is open to all students.

This is a showcase of 4 one-act plays directed by upperclassmen starring freshmen actors only. Upperclassmen must go through an application and presentation process to direct and freshmen must audition for all the acting parts.